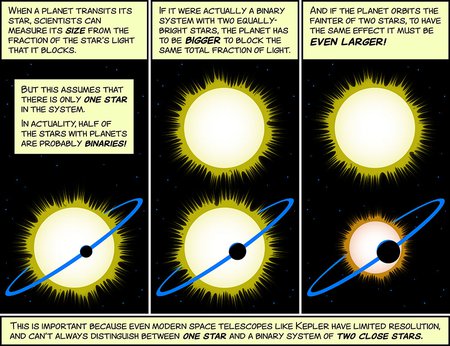 This cartoon explains why the reported sizes of some exoplanets may need to be revised in cases where there is a second star in the system. [DOWNLOAD FULL SIZE] Credit: NASA/JPL-Caltech
Tags:
astronomy & physics

In the search for planets similar to our own, an important point of comparison is the planet's density. A low density tells scientists that a planet is more likely to be gaseous like Jupiter, and a high density is associated with rocky planets like Earth. But a new study suggests some are less dense than previously thought because of a second, hidden star in their systems.

As telescopes stare at particular patches of sky, they can't always differentiate between one star and two. A system of two closely orbiting stars may appear in images as a single point of light, even from sophisticated observatories such as NASA's Kepler space telescope. This can have significant consequences for determining the sizes of planets that orbit just one of these stars, says a forthcoming study in the Astronomical Journal by Elise Furlan of Caltech/IPAC-NExScI in Pasadena, California, and Steve Howell at NASA's Ames Research Center in California's Silicon Valley.

"Our understanding of how many planets are small like Earth, and how many are big like Jupiter, may change as we gain more information about the stars they orbit," Furlan said. "You really have to know the star well in order to get a good handle on the properties of its planets."