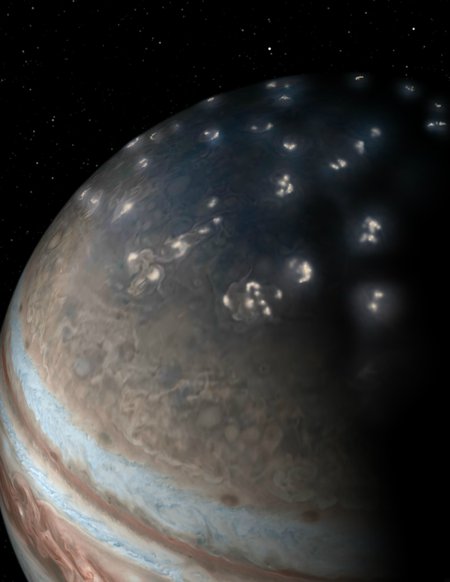 This artist's concept of lightning distribution in Jupiter's northern hemisphere incorporates a JunoCam image with artistic embellishments. Data from NASA's Juno mission indicates that most of the lightning activity on Jupiter is near its poles. Credit: NASA/JPL-Caltech/SwRI/JunoCam
Tags:
astronomy & physics, earth & planetary science

Ever since NASA's Voyager 1 spacecraft flew past Jupiter in March, 1979, scientists have wondered about the origin of Jupiter's lightning. That encounter confirmed the existence of Jovian lightning, which had been theorized for centuries. But when the venerable explorer hurtled by, the data showed that the lightning-associated radio signals didn't match the details of the radio signals produced by lightning here at Earth.

In a new paper published in Nature today, scientists from NASA's Juno mission describe the ways in which lightning on Jupiter is actually analogous to Earth's lightning. Although, in some ways, the two types of lightning are polar opposites.

"No matter what planet you're on, lightning bolts act like radio transmitters—sending out radio waves when they flash across a sky," said Shannon Brown of the Jet Propulsion Laboratory, which is managed by Caltech for NASA. Brown is a Juno scientist and lead author of the paper. "But until Juno, all the lightning signals recorded by spacecraft [Voyagers 1 and 2, Galileo, Cassini] were limited to either visual detections or from the kilohertz range of the radio spectrum, despite a search for signals in the megahertz range. Many theories were offered up to explain it, but no one theory could ever get traction as the answer."