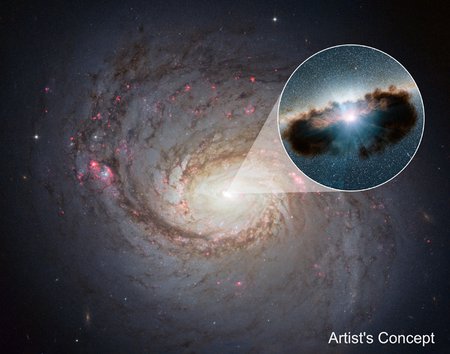 Galaxy NGC 1068 can be seen in close-up in this view from NASA's Hubble Space Telescope. NuSTAR's high-energy X-rays eyes were able to obtain the best view yet into the hidden lair of the galaxy's central, supermassive black hole. Credit: NASA/JPL-Caltech
Tags:
astronomy & physics

The most massive black holes in the universe are often encircled by thick, doughnut-shaped disks of gas and dust. This deep-space doughnut material ultimately feeds and nourishes the growing black holes tucked inside.

Until recently, telescopes weren't able to penetrate some of these doughnuts, also known as tori.

"Originally, we thought that some black holes were hidden behind walls or screens of material that could not be seen through," said Andrea Marinucci of the Roma Tre University in Italy, lead author of a new Monthly Notices of the Royal Astronomical Society study describing results from NASA's Nuclear Spectroscopic Telescope Array, or NuSTAR, and the European Space Agency's XMM-Newton space observatory.

"NuSTAR was built to peer deep into the hearts of dust-enshrouded galaxies. By extending its reach to high energy X-rays, which are inherently penetrating, NuSTAR can study objects like this which would otherwise be invisible to low energy X-ray telescopes," says Fiona Harrison, NuSTAR's principal investigator, as well as Caltech's Benjamin M. Rosen Professor of Physics and Astronomy and the Kent and Joyce Kresa Leadership Chair of the Division of Physics, Mathematics and Astronomy.

With its X-ray vision, NuSTAR recently peered inside one of the densest of these doughnuts known to surround a supermassive black hole. This black hole lies at the center of a well-studied spiral galaxy called NGC 1068, located 47 million light-years away in the Cetus constellation.

"The rotating material is not a simple, rounded doughnut as originally thought, but clumpy," said Marinucci.