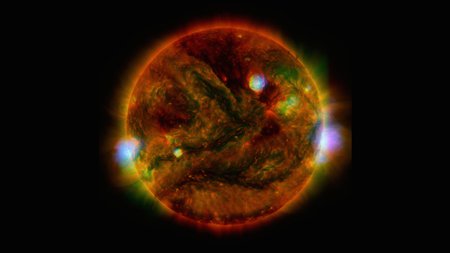 X-rays light up the surface of our sun in a bouquet of colors in this new image containing data from NASA's Nuclear Spectroscopic Telescope Array, or NuSTAR. The high-energy X-rays seen by NuSTAR are shown in blue, while green represents lower-energy X-rays from the X-ray Telescope instrument on the Hinode spacecraft, named after the Japanese word for sunrise. The yellow and green colors show ultraviolet light from NASA's Solar Dynamics Observatory.

NuSTAR usually spends its time investigating the mysteries of black holes, supernovae, and other high-energy objects in space. But it can also look closer to home to study our sun.

"What's great about NuSTAR is that the telescope is so versatile that we can hunt black holes millions of light-years away and we can also learn something fundamental about the star in our own backyard," said Brian Grefenstette, a Caltech research scientist and an astronomer on the NuSTAR team.

NuSTAR is a Small Explorer mission led by Caltech and managed by NASA's Jet Propulsion Laboratory in Pasadena, California, for NASA's Science Mission Directorate in Washington. JPL is managed by Caltech for NASA.