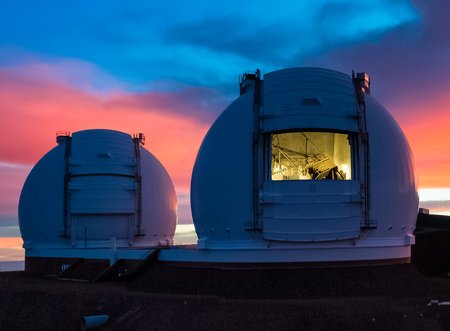 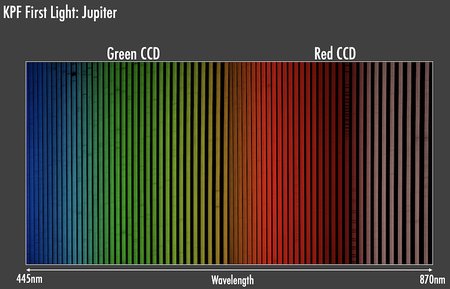 First light spectrum of the planet Jupiter taken with the Keck Planet Finder. Credit: Guðmundur Stefánsson and the KPF team 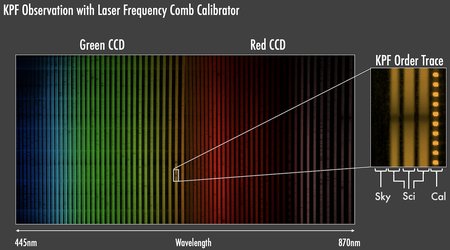 Spectrum of the star HD 164922 taken with the Keck Planet Finder during its first night of operation. The inset image depicts spectra of the star (Sci) and laser frequency comb calibration source (Cal). Credit: Guðmundur Stefánsson and the KPF team 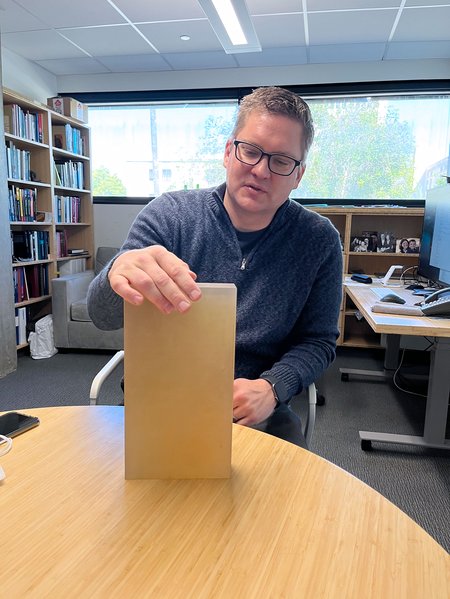 Andrew Howard with a block of Zerodur. Credit: Caltech 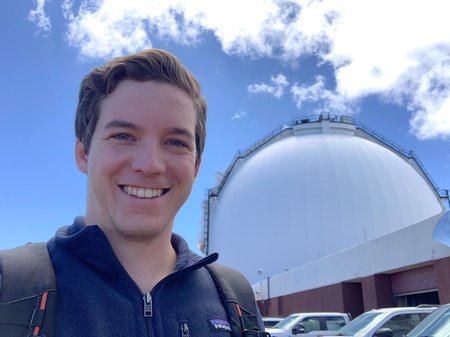 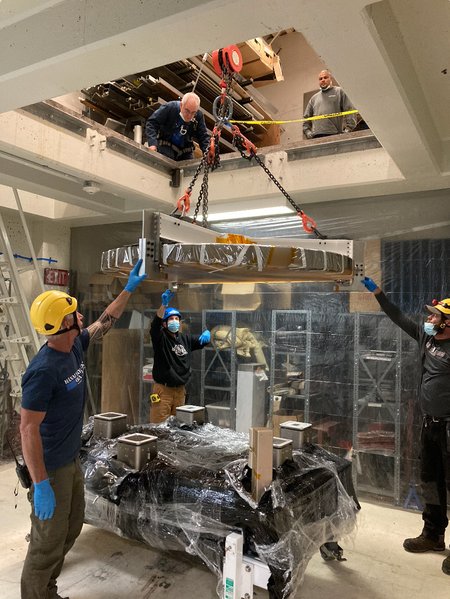 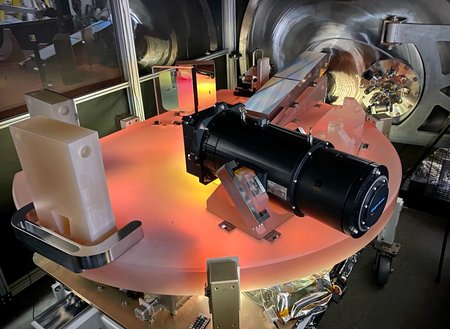 More than 5,000 exoplanets, or planets that orbit stars beyond our sun, have been spotted over the last 30 years, and discoveries from space and ground-based telescopes continue to roll in. The planets come in many sizes and compositions and include everything from molten lava worlds to gas giant planets larger than Jupiter. However, the quest for small planets similar to Earth—those most promising in the search for alien life—has been limited due to the miniscule effects that these planets have on their host stars.

That will soon change as the Caltech-led Keck Planet Finder (KPF) instrument at W. M. Keck Observatory in Hawaiʻi is now primed and ready to search for and characterize hundreds, and ultimately, thousands of exoplanets, including the missing, smaller ones. The instrument, which uses the "wobble" or radial velocity method of planet hunting, achieved so-called first light on November 9, 2022, which means it captured its first data from the sky, in this case from the planet Jupiter. While KPF will routinely observe stars, the KPF team chose to celebrate KPF's planet-finding capabilities by directly observing Jupiter in our own solar system.

"Seeing KPF's first astronomical spectrum was a moving experience," says Andrew Howard, the KPF principal investigator and a professor of astronomy at Caltech. "I'm excited to use the instrument to study the great diversity of exoplanets and to tease apart the mysteries of how they formed and evolved to their present states."

"The advent of KPF marks a major and exciting step forward in our ability to advance the quest to eventually find habitable earth-like planets around other stars," says Hilton Lewis, director of Keck Observatory. "We have been awaiting the arrival of KPF for nearly a decade, and we are thrilled to be able to take our already very successful exoplanet discovery program to the next level."

KPF detects planets by looking for the periodic motions of their host stars caused by the planets as they orbit around and gravitationally "tug" on the stars. When the stars move back and forth, or wobble, their light is shifted in the same way that the sound of a siren changes in frequency depending on whether the noise is traveling away from or toward you, a so-called Doppler shift.

KPF will detect planets by looking for this stellar wobble in the spectra of stars (a spectrum displays the different frequencies of light from a star). The less massive the planet, the smaller the wobble that is produced. The instrument's state-of-the-art technology means that it can detect planets as small as Earth, and even smaller in some cases. It can also detect Earth-mass planets in the habitable zones of smaller, cooler stars, although it cannot yet see them in the habitable zones of sun-like stars. A habitable zone is the region around a star where temperatures are suited for liquid water, a necessary ingredient for life as we know it.

"Stars that are cooler than our sun have habitable zones that are located closer to the star," Howard explains. "Any Earth-like planets in this zone would be huddled close to their stars like it is a campfire. We will continue to tune and refine KPF to detect even fainter wobbles, with the goal of eventually having the sensitivity to detect Earth-mass planets that orbit stars like our sun, the true Earth analogs."

In addition to discovering new planets, the instrument will determine the compositions of up to thousands of known planets, and answer mysteries about the surprisingly diverse array of planetary systems identified so far. KPF will also discover nearby planets that make ideal candidates for future portraits by other telescopes, such as the planned Thirty Meter Telescope, which could take direct images of planets orbiting next to their stars.

"KPF will be much more precise than our current tools, enabling richer science through better measurements of the masses, orbits, and compositions of the smaller planets," Howard says. "It will also be faster, so we can measure planet masses in much less time than it took before. This means we can survey more planets."

Steady as a Rock

The idea for KPF first came about in 2014 when astronomers were looking for ways to improve planet-hunting instruments that use the radial velocity method. These instruments had already been enormously successful, having uncovered hundreds of exoplanets, but the scientists wanted to push the technology to find smaller and smaller planets. For example, the main planet-hunting instrument at Keck Observatory before KPF, known as the High Resolution Echelle Spectrometer (HIRES), can spot stars moving back and forth, or wobbling, at a speed of 200 centimeters/second. KPF, once it is fully up and running by spring 2023, should be able to detect stellar motions of only 30 centimeters/second. That's significantly slower and translates to smaller planets with a weaker tug on their host stars.

"We're measuring a motion that is slower than a human walking. And the stars are light-years away and 100 times larger than the entire Earth," Howard says.

The project began at UC Berkeley, where its founding designer Steve Gibson began coming up with ideas for the instrument with Howard and others (Howard moved from Berkeley to the University of Hawaiʻi and then to Caltech in 2016; Gibson became a Caltech affiliate in 2021). A key innovation they developed was to use a special kind of ceramic-glass hybrid material called Zerodur that is used for the base of the instrument and main optical components such as mirrors. Made by the company Schott AG, Zerodur is used in semiconductor manufacturing as well as cookware and telescope mirrors, including those of Keck Observatory. The amber-hued material is highly thermally stable; basically, if you heat or cool the material, it only slightly expands or contracts (it has about 10,000 times less thermal movement than steel).

This thermal stability is key to KPF because any movement in the instrument can lead to false signals that appear to be Doppler shifts from stars. By reducing thermal movements, the team can make KPF even more precise.

"This is the first spectrometer to integrate Zerodur into its design," Howard says. "The material, which comes in giant slabs, is fragile and hard to work with, but it is what makes KPF so sensitive to smaller planets."

"Light bounces between mirrors inside the instrument," explains Ryan Rubenzahl (MS '21), a Caltech graduate student working on KPF in Howard's group. "If the base of the spectrograph expands, then the distance between the mirrors changes and this leads to light landing in the wrong place. It may look like stellar light has Doppler shifted because of orbiting planets, but in fact the instrument itself has shifted."

KPF uses other innovations to limit spurious signals as well. For instance, the team developed specialized fiber-optic cables with cross sections shaped like octagons instead of circles. The octagon shape evens out the flow of light in the cables, reducing the chance of false signals that look like stellar Doppler shifts. At Keck Observatory, fiber-optic cables carry light from the Keck I telescope to the KPF instrument, which resides in a basement below the observatory.

"KPF was designed from the ground up to track the spectral fingerprints of stars to better than 1 part per billion precision," says Sam Halverson, the KPF instrument scientist and an astronomer and optical engineer at Jet Propulsion Laboratory (JPL), which is managed by Caltech for NASA. "This scale of measurement represents a significant technological challenge, and required that every layer of the KPF system, from the all-Zerodur spectrometer, to the fiber delivery system, to the data analysis software, be carefully optimized to maximize performance."

Another device that will improve the scientists' understanding of false signals is called the Solar Calibrator, or SoCal for short. The small device sits in an enclosure on the roof of Keck Observatory and tracks our sun. Because a star's turbulence and sunspots can also give off anomalous Doppler shift signals, the KPF team is tracking the sun to better understand the noise and correct for it in their data.

"The sun has answers," says Rubenzahl, whose PhD thesis will focus in part on SoCal. "It's the only star in the universe for which we know every single one of its orbiting planets, and we know where every sunspot is and what the sun's magnetic field is doing at all times. So if we track the sun with KPF, we can subtract the planet signals and look at what's left to study how sunspots and other features of the sun create false Doppler shifts."

After KPF finishes its commissioning phase in the spring, it will be ready to hunt for planets. One of the projects that Howard is most excited about is to search for the so-called ultra-short period planets. These are rocky planets about the size of Earth that whip around their stars in less than a day.

"The planets are blowtorched by their stars," Howard says. "Investigating these unusual planets will demonstrate that KPF can see smaller planets on the scientific frontier. This project will allow KPF to flex its muscles and show what it can do."

Howard and his colleagues would also like to search the 50 closest to Earth for missing smaller planets. "We want to take a census of our nearest stars and find the smaller planets we haven't been able to see until now. We want to know the names, addresses, and characteristics of planets that are neighbors of our Earth."

Other planned KPF projects include a study of planets already discovered by NASA's Kepler Space Telescope, which operated from 2009 to 2018. Kepler used the transit method of planet hunting, in which planets are detected as they pass in front of their stars and block the light. Whereas Kepler measures the actual size of planets, KPF probes planet masses (the more massive a planet, the larger the wobble detected). By combining the datasets, researchers can learn about the compositions of around 1,000 of the Kepler planets.

KPF will also be ideally suited to study planets with unusual orbits. "We are really interested in learning about planets with weird orbits, such as those that go around the poles of the star rather than the equator or even stars that have backward orbits," Rubenzahl says.

The researchers say that the power of KPF lies not just in its advanced technology but in its home at the W. M. Keck Observatory, whose twin telescopes atop Maunakea are among the largest in the world with diameters of 10 meters each. The size of the Keck Observatory telescopes lets KPF study fainter stars and observe them more quickly.

"Achieving first light is a momentous occasion for the dozens of KPF scientists, engineers, and software specialists who have worked for years to develop a complete, cutting-edge exoplanet discovery system," Halverson says.