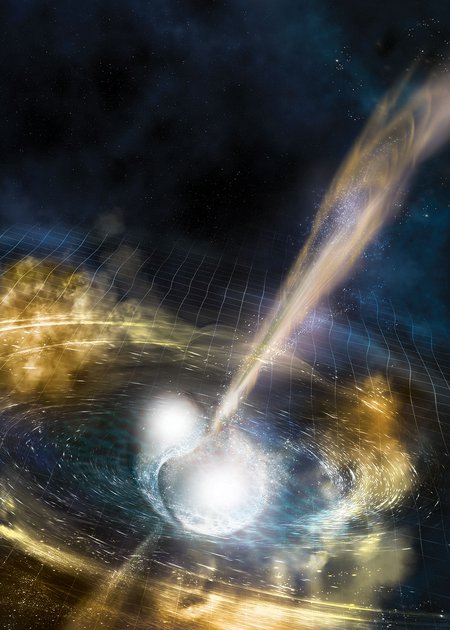 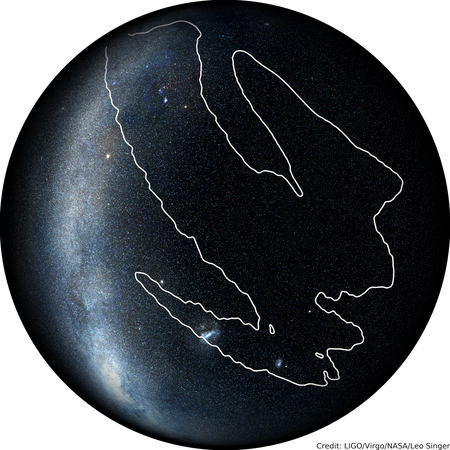 LIGO and Virgo team members estimate that the candidate gravitational signal referred to as S190425z originated from the region outlined on the sky map. The signal likely came from two colliding neutron stars. Because only LIGO Livingston and Virgo saw the signal (LIGO Hanford was offline at the time), its localization was not very precise, covering about 18 percent of the sky. Credit: LIGO/Virgo/NASA/Leo Singer (Milky Way image: Axel Mellinger) 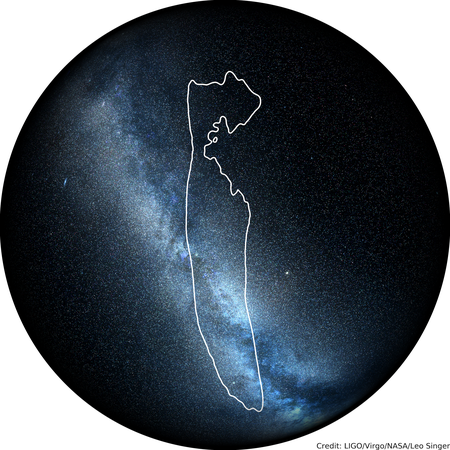 LIGO and Virgo team members estimate that the candidate gravitational signal referred to as S190426c originated from the region outlined on the sky map. The signal shows hints of originating from a merger between a black hole and neutron star. Both of the twin LIGO detectors, and Virgo, picked up the signal, narrowing its location to a region occupying about three percent of the total sky. Credit: LIGO/Virgo/NASA/Leo Singer (Milky Way image: Axel Mellinger)

On April 25, 2019, the National Science Foundation's Laser Interferometer Gravitational-wave Observatory (LIGO) and the European-based Virgo detector registered gravitational waves from what appears likely to be a crash between two neutron stars—the dense remnants of massive stars that previously exploded. One day later, on April 26, the LIGO-Virgo network spotted another candidate source with a potentially interesting twist: it may in fact have resulted from the collision of a neutron star and a black hole, an event never before witnessed.

"The universe is keeping us on our toes," says Patrick Brady, spokesperson for the LIGO Scientific Collaboration and a professor of physics at the University of Wisconsin-Milwaukee. "We're especially curious about the April 26 candidate. Unfortunately, the signal is rather weak. It's like listening to somebody whisper a word in a busy café; it can be difficult to make out the word or even to be sure that the person whispered at all. It will take some time to reach a conclusion about this candidate."

"NSF's LIGO, in collaboration with Virgo, has opened up the universe to future generations of scientists," says NSF director France Córdova. "Once again, we have witnessed the remarkable phenomenon of a neutron star merger, followed up closely by another possible merger of collapsed stars. With these new discoveries, we see the LIGO-Virgo collaborations realizing their potential of regularly producing discoveries that were once impossible. The data from these discoveries, and others sure to follow, will help the scientific community revolutionize our understanding of the invisible universe."

The discoveries come just weeks after LIGO and Virgo turned back on. The twin detectors of LIGO—one in Washington and one in Louisiana—along with Virgo, located at the European Gravitational Observatory (EGO) in Italy, resumed operations April 1 after undergoing a series of upgrades to increase their sensitivities to gravitational waves—ripples in space and time. Each detector now surveys larger volumes of the universe than before, searching for extreme events such as smashups between black holes and neutron stars.

"Joining human forces and instruments across the LIGO and Virgo collaborations has been once again the recipe of an incomparable scientific month, and the current observing run will comprise 11 more months," says Giovanni Prodi, the Virgo data analysis coordinator at the University of Trento and the Istituto Nazionale di Fisica Nucleare (INFN) in Italy. "The Virgo detector works with the highest stability, covering the sky 90 percent of the time with useful data. This is helping in pointing to the sources, both when the network is in full operation and at times when only one of the LIGO detectors is operating. We have a lot of groundbreaking research work ahead."

When two black holes collide, they warp the fabric of space and time, producing gravitational waves. When two neutron stars collide, they not only send out gravitational waves but also light. That means telescopes sensitive to light waves across the electromagnetic spectrum can witness these fiery impacts together with LIGO and Virgo. One such event occurred in August 2017: LIGO and Virgo initially spotted a neutron star merger in gravitational waves and then, in the days and months that followed, about 70 telescopes on the ground and in space witnessed the explosive aftermath in light waves, including everything from gamma rays to optical light to radio waves.

In the case of the two recent neutron star candidates, telescopes around the world once again raced to track the sources and pick up the light expected to arise from these mergers. Hundreds of astronomers eagerly pointed telescopes at patches of sky suspected to house the signal sources. However, at this time, neither of the sources has been pinpointed.

"The search for explosive counterparts of the gravitational-wave signal is challenging due to the amount of sky that must be covered and the rapid changes in brightness that are expected," says Brady. "The rate of neutron star merger candidates being found with LIGO and Virgo will give more opportunities to search for the explosions over the next year."

The April 25 neutron star smashup, dubbed S190425z, is estimated to have occurred about 500 million light-years away from Earth. Only one of the twin LIGO facilities picked up its signal, along with Virgo (LIGO Livingston witnessed the event but LIGO Hanford was offline). Because only two of the three detectors registered the signal, estimates of the location in the sky from which it originated were not precise, leaving astronomers to survey nearly one-quarter of the sky for the source.

The possible April 26 neutron star-black hole collision (referred to as S190426c) is estimated to have taken place roughly 1.2 billion light-years away. It was seen by all three LIGO-Virgo facilities, which helped better narrow its location to regions covering about 1,100 square degrees, or about 3 percent of the total sky.

"The latest LIGO-Virgo observing run is proving to be the most exciting one so far," says David H. Reitze of Caltech, executive director of LIGO. "We're already seeing hints of the first observation of a black hole swallowing a neutron star. If it holds up, this would be a trifecta for LIGO and Virgo—in three years, we'll have observed every type of black hole and neutron star collision. But we've learned that claims of detections require a tremendous amount of painstaking work—checking and rechecking—so we'll have to see where the data takes us."

More information about LIGO and Virgo

LIGO is funded by NSF and operated by Caltech and MIT, which conceived of LIGO and led the Initial and Advanced LIGO projects. Financial support for the Advanced LIGO project was led by the NSF with Germany (Max Planck Society), the U.K. (Science and Technology Facilities Council), and Australia (Australian Research Council-OzGrav) making significant commitments and contributions to the project. Approximately 1,300 scientists from around the world participate in the effort through the LIGO Scientific Collaboration, which includes the GEO Collaboration. A list of additional partners is available at https://my.ligo.org/census.php.

The Virgo Collaboration is currently composed of approximately 350 scientists, engineers, and technicians from about 70 institutes from Belgium, France, Germany, Hungary, Italy, the Netherlands, Poland, and Spain. The European Gravitational Observatory (EGO) hosts the Virgo detector near Pisa in Italy, and is funded by Centre National de la Recherche Scientifique (CNRS) in France, the Istituto Nazionale di Fisica Nucleare (INFN) in Italy, and Nikhef in the Netherlands. A list of the Virgo Collaboration members can be found at http://public.virgo-gw.eu/the-virgo-collaboration/. More information is available on the Virgo website at http://www.virgo-gw.eu.