LIGO Panel Peers into New Window on the Universe 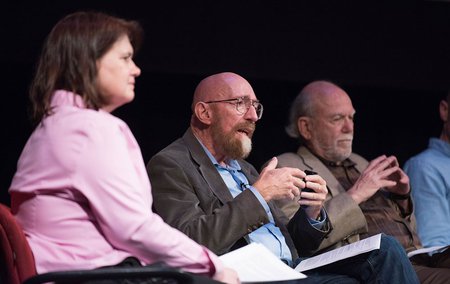 On September 14, 2015, the twin Laser Interferometry Gravitational-wave Observatory (LIGO) detectors sensed the infinitesimal vibrations of a black hole merger that took place over one billion years ago. This discovery, announced worldwide on February 11, 2016, has opened a new window on the universe. On February 23, Caltech held a public event to discuss the discovery of gravitational waves and what it will mean for our ongoing exploration and understanding of the universe.

A panel of scientists from Caltech and LIGO—moderated by Fiona Harrison, the Benjamin M. Rosen Professor of Physics and the Kent and Joyce Kresa Leadership Chair of the Division of Physics, Mathematics and Astronomy—gave a series of short talks describing their experiences with the project.

Opening remarks were delivered by President Thomas Rosenbaum, who described the discovery of gravitational waves as a "connecting of heaven and earth," likening it to the 18th-century image of lightning striking a key on a kite string. He commended the extraordinary four-decade-long vision of the project and said that it demonstrated how the combination of people and technology could change the world.

According to panelist Kip Thorne, the Richard P. Feynman Professor of Theoretical Physics, Emeritus, who has been working on the search for gravitational waves since the 1960s, and who detailed for the audience the setup of the identical detectors (located in Hanford, Washington, and Livingston, Louisiana), "Caltech's support for this project has never faltered since the beginning," he said. "It's very impressive."

"This is the biggest project the National Science Foundation has ever taken on," noted Barry Barish, the Ronald and Maxine Linde Professor of Physics, Emeritus, who described the history of building the detectors and the plans to improve their sensitivities. The NSF, he said, "never wavered, even in this high-risk endeavor. What we have just done in detecting gravitational waves is not the end of the story."

In their talks, Professor of Physics Rana Adhikari, and Anamaria Effler (BS '06), a postdoctoral scholar at the LIGO Livingston Observatory, described the painstaking effort needed to achieve and maintain the sensitivities of the LIGO detectors—which, after the Advanced LIGO technical upgrade, became the most precise measuring instrument ever constructed. Adhikari discussed the steps to limit Earth's own gravitational noise, the material science behind the superreflective mirrors used in the detectors, and the "squeezed-light system" used to minimize quantum-mechanical noise. Effler talked about the challenge of reducing environmental noise—from earthquakes, oceanic storms, planes, lightning storms, and even air-conditioning units. "Detecting a gravitational wave is like trying to hear someone at the back of a room scratch their nose, while everyone else in the room is screaming," she said.

Stan Whitcomb, LIGO chief scientist, described plans to add more detectors around the globe—including a LIGO detector in India—enabling scientists to more accurately locate the sources of gravitational waves. Whitcomb also expressed the need for accurate predictions of the gravitational-wave signals that would be produced by other cosmic phenomena—such as the mergers of neutron stars, which are extremely dense stars—in order to recognize them when they happen.

Mansi Kasliwal, an assistant professor of astronomy, described future efforts to characterize such events that produce gravitational waves. "There should be an immense flash of light, when these events occur. We use telescopes around the world to look at the sky for these flashes, and narrow down which one could have produced the gravitational waves," said Kasliwal, whose group has already successfully identified sources of gamma-ray bursts with this method.

Several of the panelists described their reactions shortly after the September 14 detection.

Mike Landry, the lead scientist at the LIGO Hanford Observatory, described how he felt upon coming into the lab the morning of the detection, and his surprise upon learning that the signal was not a test. "Often we do tests on our detectors, called blind injections, where we simulate a gravitational-wave event," he said. "I raced into the lab and asked if we were in a blind injection phase—and to my everlasting amazement, I was told no."

"I don't know if you know the feeling," said panelist Alan Weinstein, professor of physics. "You spend 15 years working on something and then suddenly there it is staring at you in the face." (Adhikari noted that it took "easily a month" before he was convinced the detection was real.)

Weinstein, who described gravitational waves as the sound of the vibrations of spacetime itself, noted that LIGO had ended the "silence" of astronomy. "It's going to be a very loud future," agreed Whitcomb.