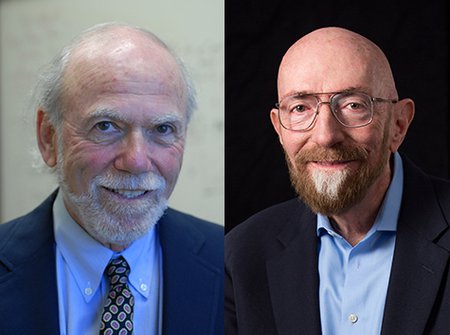 Caltech scientists Barry Barish, the Ronald and Maxine Linde Professor of Physics, Emeritus, and Kip S. Thorne (BS '62), the Richard P. Feynman Professor of Theoretical Physics, Emeritus, have been awarded the 2017 Princess of Asturias Award for Technical and Scientific Research, along with Rainer Weiss of MIT and the entire LIGO Scientific Collaboration (LSC), a body of more than 1,000 international scientists who perform LIGO research. Past winners of the award in this category include Peter Higgs, François Englert and CERN (the European Organization for Nuclear Research), and Stephen Hawking. The prize consists a Joan Miró sculpture symbolizing the award and a cash prize of 50,000 euros (about 56,000 U.S. dollars).

Thorne and Weiss, together with the late Caltech professor of physics Ronald W. P. Drever, are the founders of LIGO, the Laser Interferometer Gravitational-wave Observatory, which made history in 2016 when the LIGO team announced the first direct observation of gravitational waves—ripples in space and time predicted by Einstein 100 years earlier.

Barish was the principal investigator for LIGO from 1994 to 2005, and director of the LIGO Laboratory from 1997 until 2006. He led LIGO through its final design stages and, under his leadership, the project was funded by the National Science Foundation and construction of the interferometers was completed. In 1997, he established the LSC, which continues to detect gravitational waves with LIGO.

The Princess of Asturias Awards have been presented every year since 1981 by H. M. King Felipe of Spain. They come in eight different categories, from arts to international cooperation. Past recipients in all categories include Nelson Mandela, Arthur Miller, Susan Sontag, Doris Lessing, David Attenborough, Francis Ford Coppola, the Gates Foundation, and many more.