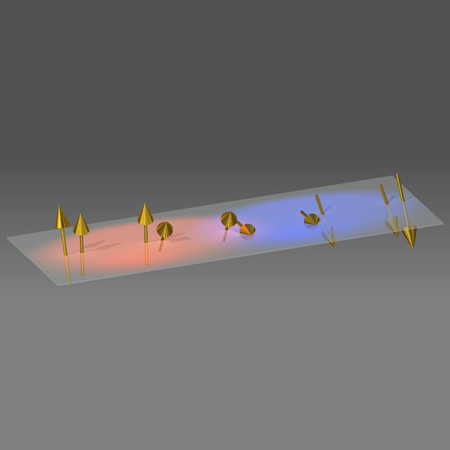 The electrons (red and blue clouds) and intrinsic magnetic moments of atoms (arrows) can work together to induce superconductivity under the right conditions. The application of pressure can help tune those interactions. Credit: Caltech 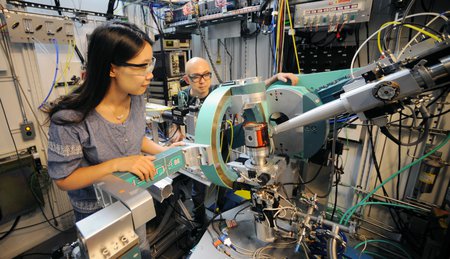 Cool a material to sufficiently low temperatures and it will seek some form of collective order. Add quantum mechanics or confine the geometry and the states of matter that emerge can be exotic, including electrons whose spins arrange themselves in spirals, pinwheels, or crystals.

In a recent pair of publications in Nature Communications, teams led by Caltech's Thomas F. Rosenbaum, professor of physics and holder of the Sonja and William Davidow Presidential Chair, report how they have combined magnetic fields and large pressures to not only induce these states at ultra-low temperatures, but also to nudge them between competing types of quantum order.

Rosenbaum is an expert on the quantum mechanical nature of materials—the physics of electronic, magnetic, and optical materials at the atomic level—that are best observed at temperatures near absolute zero. In the first of the two papers, published in June and led by Sara Haravifard, now on the faculty at Duke University, the team squeezed a collection of magnetic quantum particles in a pressure cell at temperatures near absolute zero and at magnetic fields more than 50,000 times stronger than the earth's field, and discovered the formation of new types of crystal patterns. The geometry of these crystal patterns not only reveals the underlying quantum mechanics of the interactions between the magnetic particles, but also bears on the kinds of collective states allowed for atomic systems, such as those that flow without friction.

In the work in the second paper, published in October and led by Caltech graduate student Yishu Wang and Argonne scientist Yejun Feng, Rosenbaum and colleagues also investigate how materials balance on the knife edge between different types of quantum order. In this case, however, the researchers focus on the relationship between magnetism and superconductivity—the complete disappearance of electrical resistance—and how those properties relate to one another when the material changes state under the pressures achievable in a diamond anvil cell.

The researchers used the Advanced Photon Source at Argonne National Laboratory to study the magnetic properties of the transition metal manganese phosphide (MnP) to see how it might be possible to manipulate the ordering of the spins—the intrinsic magnetic moments of the electrons—to either enhance or suppress the onset of superconductivity.

Superconductivity is a state in a material in which there is no resistance to electric current and all magnetic fields are expelled. This behavior arises from a so-called "macroscopic quantum state" where all the electrons in a material act in concert to move cooperatively through the material without energy loss.

Rosenbaum and his colleagues delineated a spiral pattern of the magnetic moments of the electrons in MnP that could be tuned by increasing pressure to induce superconductivity. Here again the particular geometry of the magnetic pattern held the key to the ultimate state that the material reached. "The experiments reveal manifest opportunities to find new low-energy states via substitutions for manganese and phosphorus with neighboring elements from the periodic table such as chromium and arsenic. The taxonomy of allowable quantum states and the ability to manipulate them unites approaches across quantum physics and technology," Rosenbaum says.

The first paper, "Crystallization of spin superlattices with pressure and field in the layered magnet SrCu2(BO3)2," was published on June 20, 2016. Coauthors include Daniel M. Silevitch, research professor of physics at Caltech. Work at Caltech was supported by the National Science Foundation. The research in the second paper, entitled "Spiral magnetic order and pressure-induced superconductivity in transition metal compounds" and published on October 6, was funded at Caltech by a U.S. Department of Energy Basic Energy Sciences award.