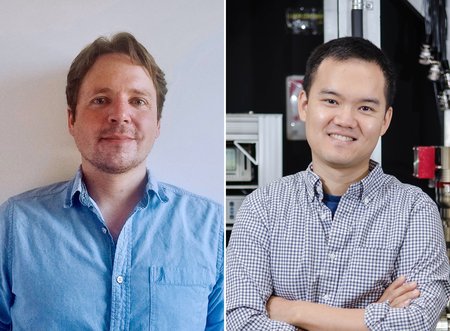 Professor of Physics and Rosenberg Scholar Manuel Endres and Professor of Physics David Hsieh are each receiving grants from the Gordon and Betty Moore Foundation as part of a new initiative to fund experimental physics investigators. The grants, totaling $1,250,000 over five years for each investigator, "provide an opportunity for outstanding scientists to pursue transformative research during a critical time in their careers directly following attainment of tenure. This funding allows physicists, during some of their most creative years, to concentrate on their research and build collaborative relationships that enable innovative discoveries," according to the foundation's news release.

The initiative will provide the first cohorts of the program, which includes 16 experimental physicists in total, with equipment grants in addition to meetings, during which the scientists can share new ideas and form collaborations. The initiative will also support the investigators "as they strive to make their research groups inclusive and advance equity in their departments," according to the foundation.

Endres conducts experimental and theoretical research in quantum science. He has developed new techniques for controlling hundreds of individual atoms at once using "optical tweezers" made of lasers; in one study, he used the method to create an atomic tweezer clock. He also generates complex quantum "many-body" systems in the lab, in which dozens or more atoms are entangled, or connected, across space. His work has applications in quantum computers and other emerging quantum technologies.

"I am honored to be part of this newly established program by the Moore Foundation. It enables high-risk, high-reward research in our lab, funded over a five-year horizon," says Endres. "I hope the results will be transformative in our field."

Hsieh's laboratory seeks to uncover novel and exotic phases of matter in quantum materials and to develop ways to manipulate their electronic properties. Some of his group's more recent work includes using lasers to sculpt the electronic properties of materials; figuring out how to "flip the bits" of an exotic phase of matter known as an excitonic insulator; and identifying signatures of the first three-dimensional quantum liquid crystals. His work has potential applications in low-power consumption and high-speed electronic and optical technologies.

"It is a tremendous honor to be among the first cohort of this prestigious and visionary program," says Hsieh. "I am very grateful to the Moore Foundation for giving me the chance to pursue highly exploratory research at this mid-career stage."

"Each of these investigators is pushing the boundaries of what is known and what is possible. While we expect some amazing (and perhaps unexpected) outcomes, we also know there will be dead ends and difficulties," wrote the Moore Foundation in its news release. "With this new funding stream, the investigators will have the opportunity to learn if the problem they yearn to tackle can be solved."