Notes from the Back Row: "Quantum Entanglement and Quantum Computing" 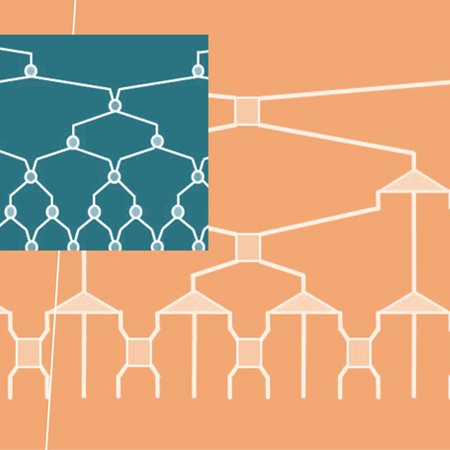 John Preskill, the Richard P. Feynman Professor of Theoretical Physics, is hooked on quanta. He was applying quantum theory to black holes back in 1994 when mathematician Peter Shor (BS '81), then at Bell Labs, showed that a quantum computer could factor a very large number in a very short time. Much of the world's confidential information is protected by codes whose security depends on numerical "keys" large enough to not be factorable in the lifetime of your average evildoer, so, Preskill says, "When I heard about this, I was awestruck." The longest number ever factored by a real computer had 193 digits, and it took "several months for a network of hundreds of workstations collaborating over the Internet," Preskill continues. "If we wanted to factor a 500-digit number instead, it would take longer than the age of the universe." And yet, a quantum computer running at the same processor speed could polish off 193 digits in one-tenth of a second, he says. Factoring a 500-digit number would take all of two seconds.

While an ordinary computer chews through a calculation one bite at a time, a quantum computer arrives at its answer almost instantaneously because it essentially swallows the problem whole. It can do so because quantum information is "entangled," a state of being that is fundamental to the quantum world and completely foreign to ours. In the world we're used to, the two socks in a pair are always the same color. It doesn't matter who looks at them, where they are, or how they're looked at. There's no such independent reality in the quantum world, where the act of opening one of a matched pair of quantum boxes determines the contents of the other one—even if the two boxes are at opposite ends of the universe—but only if the other box is opened in exactly the same way. "Quantum boxes are not like soxes," Preskill says. (If entanglement sounds like a load of hooey to you, you're not alone. Preskill notes that Albert Einstein famously derided it back in the 1930s. "He called it 'spooky action at a distance,' and that sounds even more derisive when you say it in German—'Spukhafte Fernwirkungen!'")

An ordinary computer processes "bits," which are units of information encoded in batches of electrons, patches of magnetic field, or some other physical form. The "qubits" of a quantum computer are encoded by their entanglement, and these entanglements come with a big Do Not Disturb sign. Because the informational content of a quantum "box" is unknown until you open it and look inside, qubits exist only in secret, making them ideal for spies and high finance. However, this impenetrable security is also the quantum computer's downfall. Such a machine would be morbidly sensitive—the slightest encroachment from the outside world would demolish the entanglement and crash the system.

Ordinary computers cope with errors by storing information in triplicate. If one copy of a bit gets corrupted, it will no longer match the other two; error-detecting software constantly checks the three copies against one another and returns the flipped bit to its original state. Fixing flipped bits when you're not allowed to look at them seems an impossible challenge on the face of it, but after reading Shor's paper Preskill decided to give it a shot. Over the next few years, he and his grad student Daniel Gottesman (PhD '97) worked on quantum error correction, eventually arriving at a mathematical procedure by which indirectly measuring the states of five qubits would allow an error in any one of them to be fixed.

This changed the barriers facing practical quantum computation from insurmountable to merely incredibly difficult. The first working quantum computers, built in several labs in the early 2000s, were based on lasers interacting with what Preskill describes as "a handful" of trapped ions to perform "a modest number of [logic] operations." An ion trap is about the size of a thermos bottle, but the laser systems and their associated electronics take up several hundred square feet of lab space. With several million logic gates on a typical computer chip, scaling up this technology is a really big problem. Is there a better way? Perhaps. According Preskill, his colleagues at Caltech's Institute for Quantum Information and Matter are working out the details of a "potentially transformative" approach that would allow quantum computers to be made using the same silicon-based technologies as ordinary ones.

"Quantum Entanglement and Quantum Computing" is available for download in HD from Caltech on iTunesU. (Episode 19)