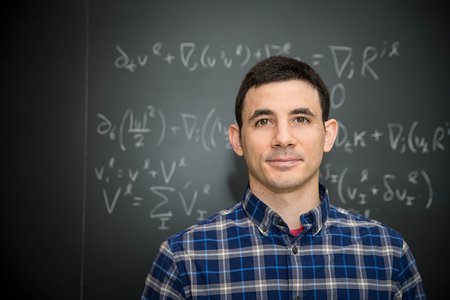 Philip Isett, assistant professor of mathematics at Caltech, has been awarded a 2019 Clay Research Award, presented by the Clay Mathematics Institute for "outstanding achievements of the world's most gifted mathematicians." Isett is receiving the award, together with Tristan Buckmaster of Princeton University and Vlad Vicol of New York University, for the "profound contributions that each of them has made to the analysis of partial differential equations, particularly the Navier-Stokes and Euler equations," according to the award citation.

The Navier-Stokes equations, proposed in 1822 by Claude-Louis Navier and George Gabriel Stokes, are used to describe fluid dynamics. They are very useful for solving practical problems such as those related to the weather, or the airflow around automobiles or the wings of planes. The Euler equations, named after Leonhard Euler (pronounced "Oiler"), an 18th-century Swiss scientist, are a special case of Navier-Stokes where there is zero internal friction, or viscosity, and are especially interesting for studying turbulence. In 2016, Isett solved a problem related to the Euler equations known as Onsager's conjecture, named after its proposer Lars Onsager, who won the Nobel Prize in Chemistry in 1968.

"Onsager's conjecture is a problem about the way energy is dissipated in turbulent fluid flow, which is described theoretically by a mechanism called an 'energy cascade,'" says Isett. "Having a confirmation of Onsager's conjecture means roughly that the idea of energy dissipation due to energy cascades is logically consistent with other predictions in turbulence theory about how velocity fluctuates within a turbulent fluid flow."

Isett received bachelor's degrees in math and economics, with a minor in physics, from the University of Maryland, College Park, in 2008. He earned his PhD in mathematics from Princeton University in 2013. After working at the Massachusetts Institute of Technology as a C.L.E. Moore Instructor and a National Science Foundation postdoctoral scholar, Isett became an assistant professor at the University of Texas at Austin in 2016. He joined Caltech in 2018, and recently won a Sloan Research Fellowship.