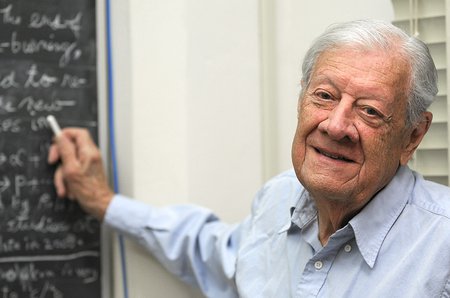 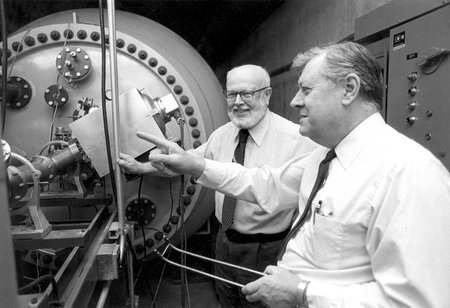 William Fowler and Charles Barnes in 1982, inspecting Kellogg Laboratory's then newest tandem accelerator, the peletron—designed by Barnes along with engineers from the National Electrostatic Corporation. Credit: Caltech Archives 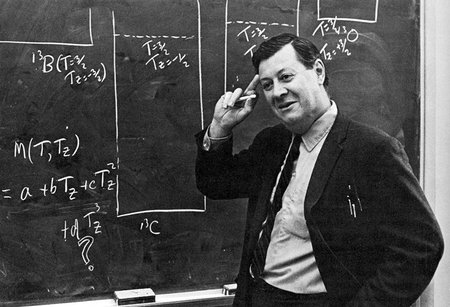 Charles A. Barnes, professor of physics, emeritus, at Caltech and an expert in the study of both the weak nuclear force—one of the fundamental forces of nature—and of the nuclear reactions that produce the majority of the elements in our universe, passed away on Friday, August 14, 2015. He was 93.

"Caltech was the place at which nuclear astrophysics was invented, and Charlie made many fundamental contributions in this field," says Fiona Harrison, the Kent and Joyce Kresa Leadership Chair of Caltech's Division of Physics, Mathematics and Astronomy and Benjamin Rosen Professor of Physics.

Born on December 12, 1921, in Toronto, Canada, Barnes received his bachelor of arts degree in physics and mathematics from McMaster University in 1943 and his master of arts degree in physics from the University of Toronto in 1944. He earned a doctorate in physics from the University of Cambridge in 1950. He came to Caltech as a research fellow in 1953 and became a senior research fellow in 1954, an associate professor in 1958, and a professor in 1962. Barnes retired in 1992.

Barnes was a fellow of the American Physical Society and the American Association for the Advancement of Science.

An experimental physicist who specialized in nuclear physics, Barnes performed pioneering research in two key areas. The first was in the study of the so-called nuclear weak force, which governs the radioactive decay of elements and is responsible for the fusion of protons to form deuterium. This fusion releases the energy that is the source of heat from our sun and other stars.

During the 1960s and 70s, in experiments using the particle accelerators in the basements of Caltech's Kellogg Radiation Laboratory and Alfred P. Sloan Laboratory of Mathematics and Physics, Barnes studied the breakdown of "mirror symmetry" in the weak force, the phenomenon that causes an experiment and its mirror experiment to give different results. "This is a surprising and novel feature of the weak nuclear force," says Caltech professor of physics Bradley W. Filippone.

Barnes was also an expert in nucleosynthesis, the formation of new atomic nuclei from simpler ones, a process that occurs on a cosmic scale in the cores of stars.

"He is probably best known for his nucleosynthesis studies of the nuclear reaction that produces oxygen from carbon and helium," says Filippone. In 1974, Barnes and his student Peggy Dyer (PhD '73) performed the first careful measurement of this reaction. Over the next two decades, in collaboration with Filippone and others, Barnes improved upon the measurement; their work culminated in a precision measurement at TRIUMF, Canada's national laboratory for particle and nuclear physics, in 1993. This reaction rate was called "a problem of paramount importance" by Caltech's William A. Fowler, co-winner of the 1983 Nobel Prize in Physics for his research into the creation of chemical elements inside stars, in his Nobel address. Through his work, Barnes provided critical input in determining the final distribution of the chemical elements produced in stars—and whether the final fate of a star is to become a black hole or some other celestial object, such as a neutron star.

In addition to his scientific achievements, Barnes will be remembered fondly for his support of young scientists. "He was a superb mentor to young scientists—including me—providing encouragement, enthusiasm, and great ideas to a generation of nuclear physicists studying both the weak nuclear force as well as nuclear reactions that occur in stars," says Filippone.

"Charlie was still active when I came to Caltech, and I remember conversations with him about signatures we could look for to identify how rare chemical elements are manufactured in the universe," Harrison says.

"Charlie was a wonderful person, scientist, and collaborator," says George L. Argyros Professor of Chemistry Nate Lewis (BS '77, MS '77), who worked with Barnes during the late 1980s. "He was thorough, scholarly, and curious, and a shining example of the best qualities in a long tradition of truly world-class experimental nuclear physicists at Caltech."

Barnes was predeceased by his wife of six decades, Phyllis, who passed away on August 12, 2013. He is survived by his son, Steven Barnes, and his daughter, Nancy Wetherow; by four grandchildren; and by two great-grandchildren.