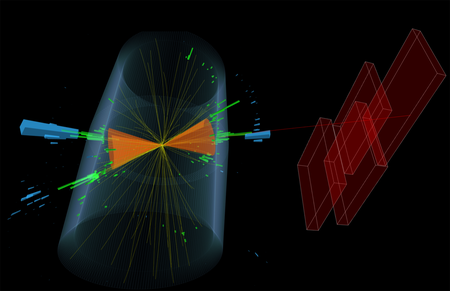 In 2012, particle physicists announced they had at last detected the slippery Higgs boson, a hard-to-pin-down particle that has the special property of endowing other fundamental particles with mass. The landmark discovery was made at CERN's Large Hadron Collider (LHC) in Geneva, Switzerland, using two instruments, including the Compact Muon Solenoid (CMS), of which Caltech is a partner.

Now, the CMS team, led by Caltech researchers, is reporting new results in the journal Physical Review Letters on the hunt for not one but two Higgs bosons. Higgs bosons are created only very rarely at the LHC in highly energetic collisions between two protons. Even more rare, scientists theorize, is the creation of two Higgs bosons from such a collision.

These pairs of Higgs bosons will interact with each other, explains co-author Si Xie, a research assistant professor of physics at Caltech and a scientist at Fermilab near Chicago.

"The strength and nature of this self-interaction will tell us about the history of our universe, and how it will evolve in the future," he says.

The new results help establish an improved, more sensitive method for searching for the Higgs boson pairs in the future. The method looks for "boosted" pairs of Higgs bosons, which are those that have so much momentum that their decay products merge into a single jet, or spray, of particles.

Xie and other Caltech researchers have now adapted this method and designed new algorithms that use these same kinds of jet events to find the extremely rare double Higgs bosons. This team includes Caltech researchers Irene Dutta (MS '20), a graduate student; Nan Lu, a postdoctoral scholar currently transitioning to a professor position; and Maria Spiropulu, the Shang-Yi Ch'en Professor of Physics.

"These highly energetic events are golden," says Xie, "and a powerful way to search for the elusive Higgs boson pairs."

"As recently as a decade ago, this analysis would be considered impossible, and undertaking it was inconceivable," says Spiropulu. "We are looking forward to further improvements and additional such analyses with the upcoming LHC run that is just starting."

The study, titled "Search for nonresonant pair production of highly energetic Higgs bosons decaying to bottom quarks," was funded by the Department of Energy's Office of Science, High Energy Physics.