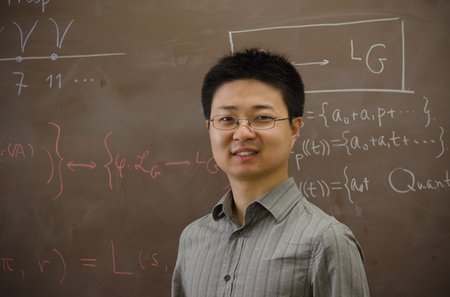 In 1994, British mathematician Andrew Wiles successfully developed a proof for Fermat's last theorem—a proof that was once partially scribbled in a book margin by 17th-century mathematician Pierre de Fermat but subsequently eluded even the best minds for more than 300 years. Wiles's hard-won success came after digging into a vast web of mathematical conjectures called the Langlands program. The Langlands program, proposed by Canadian mathematician Robert Phelan Langlands in the 1960s, acts as a bridge between seemingly unrelated disciplines in mathematics, such as number theory—the study of prime numbers and other integers—and more visual disciplines such as geometry.

However, to get the ideas he needed for his history-making proof, Wiles only scratched the surface of the Langlands program. Now Xinwen Zhu, an associate professor of mathematics at Caltech, is digging deeper, looking for further applications of this so-called unifying theory of mathematics—and how it can be used to relate number theory to disciplines ranging from quantum physics to the study of donut-shaped geometric surfaces.

Zhu came to Caltech from Northwestern University in September. Originally from Sichuan, China, he received his bachelor's degree from Peking University in 2004 and his doctorate from UC Berkeley in 2009.

He recently spoke with us about his work, the average day of a mathematician, and his new life in California.

Can you give us a general description of your research?

My work is in mathematics, related to what's called Langlands program. It's one of the most intrinsic parts of modern mathematics. It relates number theory—specifically the study of prime numbers like 2, 3, 5, 7, and so on—to topics as diverse as geometry and quantum physics.

Why do you want to connect number theory to geometry and quantum physics?

Compared to number theory, geometry is more intuitive. You can see a shape and understand the mathematics that are involved in making that shape. Number theory is just numbers—in this case, just prime numbers. But if we combine the two, then instead of thinking about the primes as numbers, we can visualize them as points on a Riemann surface—a geometric surface kind of represented by the shape of a donut—and the points can move continuously. Think of an ant on a donut—the ant can move freely on the surface. This means that a point on the donut has some intrinsic connections with the points nearby. In number theory it is very difficult to say that any relationship exists between two primes, say 5 and 7, because there are no other primes between them, but there are points between any two points. It is still very difficult to envision, but it gives us a more intuitive way to think about the numbers.

We want to understand certain things about prime numbers—for example, the distribution of primes among all natural numbers. But that's difficult when you're working with just the numbers; there are very few rules, and everything is unpredictable. The geometric theory here adds a sort of geometric intuition, and the application to quantum field theory adds a physical intuition. Thinking about the numbers and equations in these contexts can give us new insights. I really don't understand exactly how physicists think, but physicists are very smart because they have this intuition. It's just sort of their nature. They can always make the right guess or conjecture. So our hope is to use this sort of intuition to come back to understand what happens in number theory.

Mathematicians don't really have lab spaces or equipment for experiments, so what does a day at the office look like for you?

Usually I just think. And unfortunately, it's usually without any result, but that's fine. Then, after months and months, one day there is an idea. And that's how we do math. We read papers sometimes to keep our eyes on what the newest development is, but it's probably not as important as it is for other disciplines. Of course, one can also get new ideas and stimulation from reading, so we keep our eyes on what's going on this week.

My interest in math began when I was a child. People can usually count numbers at a pretty early age, but I was interested in math and could do calculations a little bit quicker and a bit younger than others. It came naturally to me. Also, my grandfather was a chemist and physicist, and he always emphasized the importance of math.

But to be honest, I didn't really know anything about this aspect of the Langlands program until I was in graduate school at Berkeley. My adviser, Edward Frenkel, brought me into this area.

What are you most excited about in terms of your move to Caltech?

I think this is, of course, a fantastic place. The undergraduates here are very strong, and the graduate school is also very good, so I'm also very excited to work with all of those young people. Also, the physics department here is very good, and as I said, quantum field theory has recently provided promising new ways to think about these old problems from number theory. Caltech professors Anton Kapustin and Sergei Gukov have played central roles in revealing these connections between physics and the Langlands problem.

Is there anything else that you're looking forward to about living in Pasadena?

I'm from Sichuan [province in China], and one thing that I miss is the food. It's hot and spicy, and now it's also kind of popular in the U.S. And there are very good Szechwan restaurants in the San Gabriel Valley. Actually, maybe the best Szechwan food in the U.S. is right here.

Aside from your research and professional interests, do you have any other hobbies?

Yes, I've been playing the game Go for more than 20 years. It's a board game that is kind of like chess. It's interesting, and it's very complicated. Many years ago, you'd play with a game set and one opponent, but now you can also play it online. And that's good for me because after moving from place to place, it's hard to consistently find someone to play with.