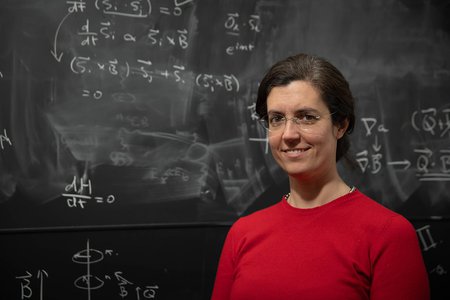 About 80 percent of all the matter in our universe is invisible. Called dark matter, this mysterious substance is known to exist throughout the universe due to its gravitational tugs on ordinary matter. Yet despite its prevalence, dark matter continues to evade direct detection. Kathryn Zurek, a new professor of theoretical physics at Caltech, has some ideas about how to change that.

"I develop theories of dark matter and then ideas for how one might experimentally detect it," she says. "It's risky research in the sense that we don't know if we'll actually detect dark matter. We need luck, hard work, and good ideas."

We talked with Zurek about the nature of dark matter and the search for its true identity.

What do we know about dark matter now?

Dark matter permeates the galaxy and the universe. We are moving through the galaxy, and as we move, that creates a dark-matter wind that is moving through this room as we speak. We know about dark matter through its gravitational effects on normal matter, but it doesn't give off any light so we cannot see it, and we don't know what it is made of.

What is the most popular theory now to explain the nature of dark matter?

WIMPs [weakly interacting massive particles] are the leading candidate. The WIMPS are so named because they are weakly interacting with other particles. Right now, experiments like SuperCDMS [Super Cryogenic Dark Matter Search] and XENON1T [Xenon 1 ton] are still searching for WIMPS through interactions with atomic nuclei but so far have not turned up any evidence. If WIMPs aren't detected soon with the large xenon detectors, we are going to need even larger multi-ton-scale experiments—and this becomes very expensive. Should we pursue these even larger experiments? I think for many people the answer is no.

How do you propose we search for dark matter?

Dark matter could be part of what I call dark or hidden sectors. The idea is that there is another sector of our universe, in addition to the visible one, where dark matter has its own dynamics. For example, the WIMPs are thought to interact with the Standard Model of particle physics through the known force of weak interactions. We demand that WIMPs be involved in the solution to some of the problems of the Standard Model, like why the Higgs boson has the mass that it does. These hidden-sector particles by contrast would interact through a new force with its own dynamics. This is a paradigm shift on many levels, including the way we search for dark matter. We are not demanding that dark matter solve any problems of the visible universe. It has a life of its own.

Are there other projects you are working on to study dark matter?

We also want to use pulsar-timing arrays, which involve collections of flashing objects in the cosmos called pulsars. These will help us study dark-matter substructure, or basically how clumpy dark matter is. When a dark-matter halo, or clump, passes near us or a pulsar, it can give rise to shifts in the time of arrival of a pulse. And if you detect dark-matter substructure in this way, then the clumpiness of the dark matter reveals something about its fundamental nature. It's like when you look out at our universe and there is all sorts of structure: the planets, the stars, disks, and filaments. The dark sector likewise forms structures through the interplay of gravity and dark-sector dynamics, and we would like to study what these structures are on similar scales.

This pulsar-timing work is a nice compliment to directly probing dark matter with laboratory experiments.

Is this kind of research considered high-risk, high-reward, like LIGO? [LIGO made history by making the first direct detections of gravitational waves, ripples in space and time, in 2015, an endeavor that took decades of dedicated work.]

Yes, this is similar to LIGO in that we need to have luck and nature on our side. With LIGO, they did not know that the black hole and neutron star merger rate was going to be high enough to detect the gravitational waves relatively quickly. Nature was kind to the LIGO team. Dark-matter research is an even riskier proposition in some ways because we have greater uncertainty on the rate, but it's an important problem to explore. When LIGO discovered gravitational waves, it became a new branch of astronomy. If and when we discover dark matter, it's going to become a new branch of physics.

Do you have any hobbies you'd like to tell us about?

I play classical piano; that used to include a lot of Brahms, Bach, and Beethoven, with some 20th-century composers and improvisation mixed in. But these days, it is a lot of Mozart with a bit of improv—I have a young daughter who likes to dance to the music and Mozart provides a nice simple melody and beat. I also enjoy the mountains, which used to mean long hikes, backcountry skiing, and some climbing, but these days, my daughter and I walk slower and talk about the plants and trees, their flowers and leaves.