SPIDER Experiment Touches Down in Antarctica 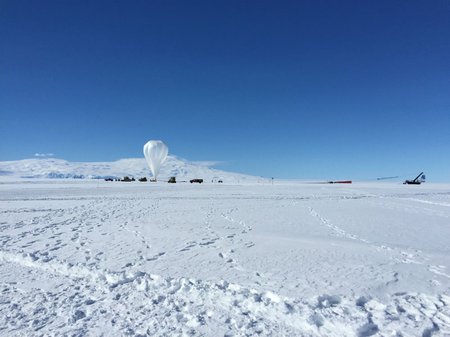 SPIDER and its balloon, ready for launch. Credit: Jeff Filippini 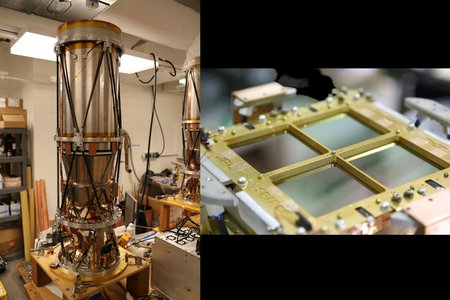 Each of SPIDER's six telescopes (one shown here, at left, on a lab bench) includes a pair of lenses that focus light onto a focal plane (at right) made up of 2,400 superconducting detectors. Three of the telescopes measure at a frequency of 100GHz, while the other three measure at 150GHz. Credit: Jon Gudmundsson (Princeton University) 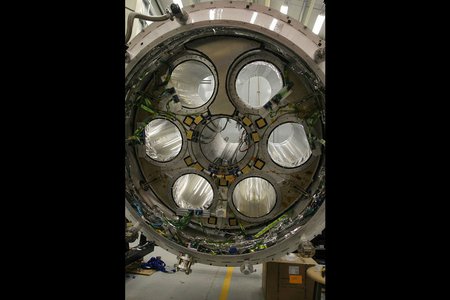 Like bullets in a revolver, the six SPIDER telescopes slide into the instrument's cryostat (shown here without the telescopes). The cryostat is a large tank of liquid helium that cools SPIDER to temperatures near absolute zero so the thermal glow of the instrument itself does not overwhelm the faint signals they are trying to detect. Credit: Steve Benton (University of Toronto) 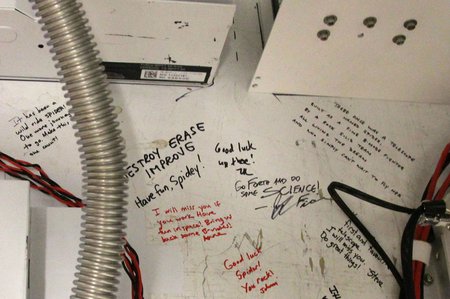 Before SPIDER launched, many members of the team signed an out-of-the-way spot on the payload, wishing "Spidey" well and telling it to make them proud. Bill Jones, the project's principal investigator from Princeton University, also affixed a small photo of the late Andrew Lange. Credit: Steve Benton (University of Toronto) 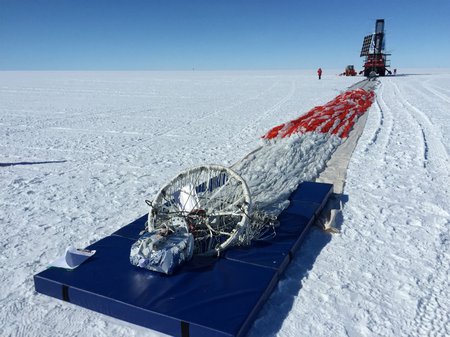 Prior to launch, the team laid out the parachute and hang lines in front of SPIDER, seen in the distance. The long-duration balloon that would carry SPIDER into the sky is attached to the end of the parachute shown here in the foreground. Credit: Jeff Filippini

SPIDER and its balloon, ready for launch. Credit: Jeff Filippini 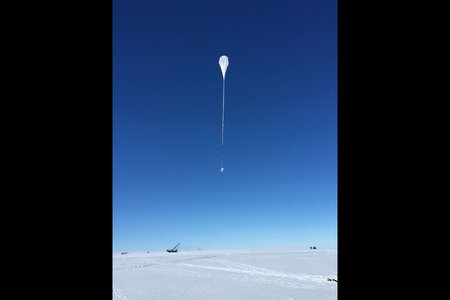 SPIDER launched successfully on New Year's Day! Watch a video of the complete launch.
"One of the amazing things about ballooning is there is this moment where you're on the ground doing calibration work, really not in the deployment environment, and then you launch, and you start getting data back. That sharp dividing line between before and after the launch is really remarkable," says Filippini. "So many things can go wrong, and by and large, they didn't." Credit: Jeff Filippini 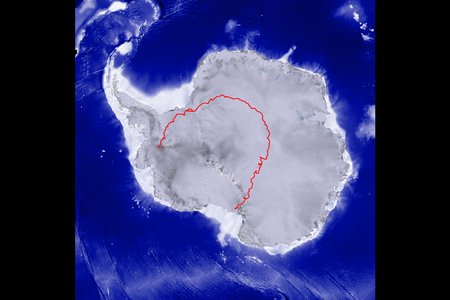 Sixteen days after launch, the team brought SPIDER back down to the ice because wind patterns suggested that the instrument might otherwise drift northward off the continent and not return to a safe recovery location. SPIDER landed in a remote area of Antarctica, more than 1,000 miles from McMurdo Station. The team is working on plans to recover the hard drives and payload. Credit: John Ruhl (Case Western Reserve University)
Tags:
astronomy & physics

After spending 16 days suspended from a giant helium balloon floating 115,000 feet above Antarctica, a scientific instrument dubbed SPIDER has landed in a remote region of the frozen continent. Conceived of and built by an international team of scientists, the instrument launched from McMurdo Station on New Year's Day. Caltech and JPL designed, fabricated, and tested the six refracting telescopes the instrument uses to map the thermal afterglow of the Big Bang, the cosmic microwave background (CMB). SPIDER's goal: to search the CMB for the signal of inflation, an explosive event that blew our observable universe up from a volume smaller than a single atom in the first fraction of an instant after its birth.

The instrument appears to have performed well during its flight, says Jamie Bock, head of the SPIDER receiver team at Caltech and JPL. "Of course, we won't know everything until we get the full data back as part of the instrument recovery."

Although SPIDER relayed limited data back to the team on the ground during flight, it stored the majority of its data on hard drives, which must be recovered from the landing site. The researchers carefully monitored the experiment's flight path, and when wind patterns suggested that the winds might carry the experiment over the ocean, they opted to bring SPIDER down a bit early. It touched down in West Antarctica, more than 1,000 miles from McMurdo Station.

Jeff Filippini, a former postdoctoral scholar at Caltech and member of the SPIDER team who is now an assistant professor at the University of Illinois, Urbana-Champaign, says the landing site is near a few outlying stations. "We are negotiating plans for recovering the data disks and payload," he says. "We are all looking forward to poring over the data."

The team originally proposed SPIDER to NASA in 2005. It is an ambitious instrument, and there were many technical challenges to getting it off the ground. Political challenges also played a role: in October 2013, after the team had completed full flight preparations in the summer and transported SPIDER to the Antarctic by boat, the U.S. government shut down, canceling all Antarctic balloon flights. SPIDER had to be shipped back to the United States.

"But our team persevered," says Bock. "We used that extra time to make improvements and to fix a few problems. It is great to finally see all of our worries resolved and the hard work paying off."

A second SPIDER flight is planned for some time in the next two to three years, depending on how the hardware fares this time around.

The SPIDER project originated in the early 2000s with the late Andrew Lange's Observational Cosmology Group at Caltech and collaborators. The experiment is now led by William Jones of Princeton University, who was a graduate student of Lange's. The other primary institutions involved in the mission are the University of Toronto, Case Western Reserve University, and the University of British Columbia. SPIDER is funded by NASA, the David and Lucile Packard Foundation, the Gordon and Betty Moore Foundation, the Canadian Space Agency, and Canada's Natural Sciences and Engineering Research Council. The National Science Foundation provides logistical support to the team on the ice through the U.S. Antarctic Program.