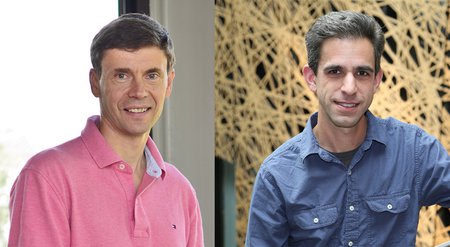 Caltech professors Alexei Kitaev and Christopher Umans have been named Simons Investigators. These appointments are given annually to "support outstanding scientists in their most productive years, when they are establishing creative new research directions." Investigators receive $100,000 annually for five years.

Alexei Kitaev, the Ronald and Maxine Linde Professor of Theoretical Physics and Mathematics, studies quantum computation and related areas of theoretical physics. He was recognized for helping to found the field of topological quantum computing, which involves theoretical computing devices that use a type of elementary particle called an anyon to do computations.

"The central idea is to protect quantum information from errors by encoding it in a collective state of many electrons called a 'topological quantum phase,'" Kitaev says. "I proposed a scheme whereby a piece of quantum information is stored in a pair of particles called Majorana modes at the ends of a microscopic wire. This idea has been elaborated by other physicists and is now being tested experimentally."

In 2012, Kitaev received the $3 million Fundamental Physics Prize for his work developing algorithms and theories to enable quantum computing. A member of Caltech's Institute for Quantum Information and Matter, he was named a MacArthur Fellow in 2008.

Chris Umans, a professor of computer science, studies complexity theory, a field that aims to determine rigorously the possibilities and limitations of computation. "Computational complexity attempts to answer the question: 'What is computationally feasible given limited computational resources?'" he says.

Umans was noted by the Simons Foundation for his work on matrix multiplication, a prominent problem that involves the devising of optimal algorithms for multiplying two n-by-n matrices. The citation also noted his development of a "novel algorithm for polynomial factorization."

"The Simons award was a complete surprise! I am honored to be recognized in this way and grateful to the Simons Foundation for their support," he says. "Long-term support like this allows researchers to really focus on difficult, long-term problems, and this is incredibly valuable, especially in these fields that are filled with deep, foundational open questions."

Umans also received an NSF CAREER award in 2004 and an Alfred P. Sloan Research Fellowship in 2005.

The Simons Foundation was founded in 1994 by Jim and Marilyn Simons to advance research in mathematics and the basic sciences. In 2012, the Simons Foundation awarded fellowships to Hirosi Ooguri, the Fred Kavli Professor of Theoretical Physics and Mathematics and Director of Caltech's Walter Burke Institute for Theoretical Physics, and former professor of astrophysics Christopher Hirata (BS '01), now a professor of physics at Ohio State University.