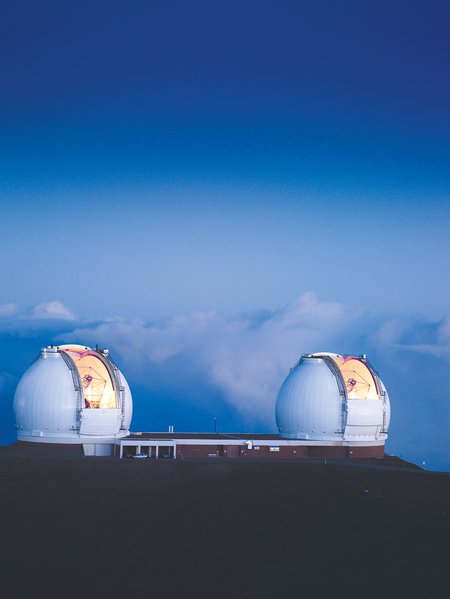 Although Keith Matthews was about to make history, he went about his tasks like any others. It was the night of March 16, 1993, nearly 14,000 feet above sea level on Mauna Kea in Hawaii, and he had just installed the first instrument on the brand-new 10-meter telescope at W. M. Keck Observatory. Matthews, who built the instrument—a near-infrared camera, abbreviated NIRC—was set to make the first scientific observations using the newly crowned Biggest Telescope in the World.

This Saturday marks the 20th anniversary of those inaugural observations. Speaking at a symposium on March 7 commemorating the anniversary, Tom Soifer, chair of the Division of Physics, Mathematics and Astronomy, called those initial observations "one of the greatest events in astronomy. It's been a remarkable 20 years of exploration and discovery," he said.

At the time of that first observing run, the telescope had yet to be officially commissioned and wasn't yet optimized, but Matthews—now chief instrument scientist at Caltech—was there to see just what the telescope could do. "Fortunately, it worked right off the bat," he recalls.

The observatory was the culmination of more than a decade of planning, designing, and building made possible by unprecedented financial contributions from the Keck Foundation ($70 million for the first telescope) and by cutting-edge technology. But Matthews didn't feel much reason to jump for joy when he saw that first star, sharp and bright on the computer screen. He was too busy to be excited, he says, and those observations were just another set of steps in a long process that had begun more than a decade prior, when he joined the telescope design team in 1979. Caltech would become an official partner of the observatory in 1985, joining the University of California and the University of Hawaii (NASA would join in 1996).

To be sure, Matthews was happy that everything was working relatively smoothly. But, he says, throughout the whole process of making the telescope and the instrument a reality, there was always something else that he needed to focus on and get done. He was observing alone—a rarity these days—operating on four hours of sleep for roughly nine nights. He slept at 9,000 feet and had to make the drive up the summit into the sun's glare every day. The altitude at the summit made the work even more grueling.

And there were still the inevitable bugs and problems. For one, the Dewar—the container that housed the infrared camera and kept it cold—was leaking liquid helium. Matthews tried everything from rubber cement to glycerol to control the leak. The computers also kept crashing, the monitors going blank one by one. "It was funny," he recalls. "All the screens started to go like a house of cards."

He eventually found stopgap measures to control the leak, and the computers were simply rebooted. The observing run demonstrated that even before the telescope was fully optimized, it was already able to achieve better resolution than the 200-inch Hale Telescope at Palomar Observatory, supplanting the 200-inch as the world's most powerful telescope—a title the 200-inch had held since 1948. A second, identical Keck telescope was built in 1996.

In the two decades since, Keck has become arguably the most prominent and productive observatory in astronomy, helping scientists learn how the universe has evolved since the Big Bang, how galaxies form, and how stars are born. The twin telescopes, Keck I and Keck II, have studied dark matter—the mysterious, unseen stuff that makes up most of the universe's mass—as well as dark energy, the cosmic force that's pushing the universe apart. The telescopes have peered into other planetary systems and revealed insights into the origin of our own solar system. In describing how Keck has surpassed expectations, Caltech's Richard Ellis said at last week's symposium, "Unlike politicians, astronomers deliver much more than they predicted."

The symposium highlighted the fact that Keck has proved indispensible, as a powerful telescope in its own right and as an essential complement to other telescopes. "Keck has been fundamental in establishing partnerships with space telescopes," Ellis said. For example, he has used Keck with the Hubble Space Telescope and the Spitzer Space Telescope to probe some of the most distant galaxies ever observed, revealing a poorly understood period of cosmic history roughly a billion years after the Big Bang. With the help of Keck, Fiona Harrison—a Caltech astronomer and principal investigator of the NuSTAR mission, a space telescope that detects high-energy X rays—discovered bright flares emanating from the supermassive black hole at the center of the galaxy. The flares, she said, could be due to asteroids being ripped apart by the black hole.

And even though NASA's Kepler Space Telescope has been revolutionary in identifying thousands of candidate planets, a ground-based telescope like Keck is needed to verify and characterize those worlds. Caltech's John Johnson, for example, has used Keck to characterize what he says are the most typical kind of planetary system in the galaxy. From his analysis, he estimates that there are at least 100 billion planets in the Milky Way. Keck has also allowed Caltech's Mike Brown to measure detailed spectra of Jupiter's moon Europa, finding evidence that suggests its subsurface ocean may bubble up to its frozen surface.

Of course, none of these discoveries would have been possible without Keck's technological advances. Constructing a telescope as large as Keck using a single mirror would be prohibitively expensive and difficult to engineer. Instead, the Keck telescopes each consist of 36 hexagonal mirrors, forming a total aperture of 10 meters. No one had ever attempted a segmented-mirror telescope before Keck. Ellis was at Cambridge University while the telescope was being developed. "We were looking at this plan with total incredulity," he recalled at the symposium. "The idea of a finely segmented telescope was crazy to us, frankly."

One of the difficulties, for example, was in polishing the mirrors. Because a spherical mirror has rotational symmetry, it's relatively easy to polish. But because each of Keck's segments forms just a part of a parabolic curve, each mirror is asymmetrical, making it near impossible to polish. The solution? Force each segment into a spherical shape. Once polished, the mirror is released and pops back into its original, irregular form.

The telescope is fitted with a suite of instruments that have been constantly upgraded and replaced over the last 20 years—and Caltech has played leading roles with many of those instruments, including NIRC and NIRC2 (the second-generation NIRC) and MOSFIRE (co-led by Caltech's Chuck Steidel), a new spectrometer that was just installed last year. Matthews was also the leader on NIRC2, played a significant role in MOSFIRE, and is now leading the effort on a new instrument, a near-infrared spectrometer called NIRES.

As technology improves, telescopes get bigger and more powerful. Keck's eventual replacement, the Thirty Meter Telescope (TMT), in which Caltech is a partner, won't be ready for at least 10 years. In the meantime, Keck will continue to hold its status as the biggest telescope in the world. And, as Caltech's Judith Cohen pointed out in her symposium talk, even after the TMT is built Keck will remain a useful facility—in much the same way that Palomar Observatory remains productive more than 60 years after it was built. In the last two decades, Keck has had a good run in helping astronomers explore the cosmos—but that run is far from over.