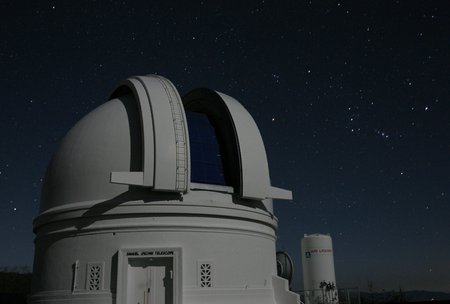 CAMBRIDGE, England--When planetary scientists announced on July 29 that they had discovered a new planet larger than Pluto, the news overshadowed the two other objects the group had also found. But all three objects are odd additions to the solar system, and as such could revolutionize our understanding of how our part of the celestial neighborhood evolved.

To the discoverers, the objects still go by the unofficial code-names "Santa," "Easterbunny," and "Xena," though they are officially known to the International Astronomical Union as 2003 EL61, 2005 FY9, and 2003 UB313. The three objects were all detected with the 48-inch Samuel Oschin Telescope at Palomar Observatory by a team composed of planetary scientists from the California Institute of Technology, the Gemini Observatory, and Yale University. Xena is the object the group describes as one of sufficient size to be called the tenth planet.

"All three objects are nearly Pluto-sized or larger, and all are in elliptical orbits tilted out of the plane of the solar system," says Mike Brown, a professor of planetary astronomy at Caltech and leader of the effort.

"We think that these orbital characteristics may mean that they were all formed closer to the sun, and then were tossed around by the giant planets before they ended up with the odd orbits they currently have," Brown adds.

The other two members of the team are Chad Trujillo, a former postdoctoral researcher at Caltech and currently an astronomer at the Gemini Observatory in Hawaii, and David Rabinowitz of Yale University. Trujillo has led the spectrographic studies of the discoveries, while Rabinowitz is one of the builders of the instrument affixed to the Oschin Telescope for the study, and has led the effort to understand the color and spin of the objects.

Santa, Easterbunny, and Xena are all members of the Kuiper belt, a region beyond the orbit of Neptune that for decades was merely a hypothetical construct based on the behavior of comets, among other factors. But astronomers began detecting objects in the mid-1990s, and the Kuiper belt was suddenly a reality rather than a hypothesis.

Xena, which is currently about 97 astronomical units from the sun (an astronomical unit being the 93-million-mile distance between the sun and Earth), is at least the size of Pluto and almost certainly significantly larger. The researchers are able to determine its smallest possible size because, thanks to the laws of motion, they know very accurately the distance of the planet from the sun. And because they also know very precisely how much light the planet gives off, they can also calculate the diameter of the planet as if it were reflecting sunlight as a uniformly white ball in the sky. Hence, a perfectly round mirror at that distance would be the size of Pluto.

However, the question remains how well the new planet reflects light. The less reflective its surface, the bigger it must be to put out enough light to be detected here on Earth.

At any rate, the researchers hope that infrared data returned by the Spitzer Space Telescope over the weekend of August 27-28, in addition to recently obtained data from the 30-meter IRAM telescope in Spain, will help nail down Xena's size. In much the same way that the detected visible light sets a lower limit on the diameter, the infrared radiation detected by the Spitzer will ideally set an upper limit. That's because the Spitzer is capable of measuring the total amount of heat given off by the planet; and because the researchers know the likely surface temperature is about 405 degrees below zero Fahrenheit, they can infer the overall size of the body.

Brown predicts that Xena will likely be highly reflective, because the spectrographic data gathered by his colleague and codiscoverer Chad Trujillo at the Gemini Observatory show the surface to have a similar composition to that of the highly reflective Pluto. If indeed Xena reflects 70 percent of the sunlight reaching it, as does Pluto, then Xena is about 2700 kilometers in diameter.

And then there's the matter of naming the new planet, which is pretty much in the hands of the International Astronomical Union. Brown says the matter is in "committee limbo": while one IAU committee is taking its time deciding whether or not it is a planet, other committees have to wait until they know what it is before they can consider a name. So for the time being, the discoverers keep calling the new planet Xena, though the name will sooner or later change.

The second of the objects, currently nicknamed Santa because Brown and his colleagues found it on December 28, 2004, is one of the more bizarre objects in the solar system, according to Rabinowitz. His observations from a small telescope in Chile show that Santa is a fast-rotating cigar-shaped body that is about the diameter of Pluto along its longer axis. No large body in the solar system comes even close to rotating as fast as Santa's four-hour period. Observations by Brown and his colleagues at the Keck Observatory have shown that Santa also has a tiny moon, nicknamed Rudolph, which circles it every 49 days. The third new discovery is Easterbunny, so named because of its discovery earlier this year on March 1. Easterbunny is also at 52 astronomical units, and like Santa is probably about three-quarters the size of Pluto. Morever, Easterbunny is now the third known object in the Kuiper belt, after Pluto and Xena, which is known to have a surface covered in frozen methane. For decades, Pluto was the only known methane-covered object beyond Neptune, but "now we suddenly have three in a variety of sizes at a variety of distances and can finally try to understand Pluto and its cousins," says Kris Barkume, a PhD student working with Brown.

"With so many bright objects coming out at once it is hard to keep them all straight," says Brown, adding that the remote region beyond Neptune may present even more surprises in the future.

"We hope to discover a few more large objects in the outer solar system."

The research is funded by NASA. For more information see http://www.gps.caltech.edu/~mbrown