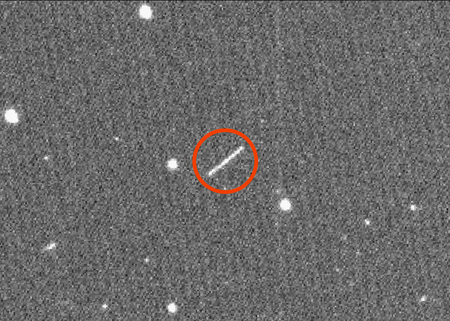 This is the first image of Asteroid 2020 QG, captured by Caltech's Zwicky Transient Facility (ZTF) after the asteroid's closest approach to Earth at a distance of 1,830 miles above the planet's surface. The asteroid shows up as a streak because it is closer than the background stars, and zipped past ZTF's camera. Credit: ZTF/Caltech Optical Observatories

This simulation image shows how Earth's gravity bent the path of Asteroid 2020 QG. The green line indicates the object's apparent motion relative to Earth, and the bright green marks are the object's location at approximately half-hour intervals. The Moon's orbit is grey. The blue arrow points in the direction of Earth's motion and the yellow arrow points toward the sun. Credit: MPC

This is the first image of Asteroid 2020 QG, captured by Caltech's Zwicky Transient Facility (ZTF) after the asteroid's closest approach to Earth at a distance of 1,830 miles above the planet's surface. The asteroid shows up as a streak because it is closer than the background stars, and zipped past ZTF's camera. Credit: ZTF/Caltech Optical Observatories

On August 16, the Zwicky Transient Facility (ZTF), a robotic survey camera located at Palomar Observatory near San Diego, spotted an asteroid that had, just hours earlier, traveled only 1,830 miles (2,950 kilometers) above Earth's surface. Designated 2020 QG, it is the closest known asteroid to fly by Earth without impacting the planet. The previous known record-holder is asteroid 2011 CQ1, discovered by the Catalina Sky Survey in 2011, which passed above Earth about 1,550 miles (2,500 kilometers) higher than 2020 QG.

Asteroid 2020 QG is about 10 to 20 feet (3 to 6 meters) across, or roughly the size of an SUV, so it was not big enough to do any damage even if it had been pointed at Earth; instead, it would have burned up in our planet's atmosphere.

"The asteroid flew close enough to Earth that Earth's gravity significantly changed its orbit," says ZTF co-investigator Tom Prince, the Ira S. Bowen Professor of Physics at Caltech and a senior research scientist at JPL, which Caltech manages for NASA. Asteroids of this size that fly roughly as close to Earth as 2020 QG occur about once a year or less, but many of them are never detected.

"ZTF's large-field of view and rapid data processing allows it to find rare asteroids like this that other telescopes might not find," says George Helou, ZTF co-investigator and director of IPAC, an astronomy center, at Caltech. The camera is housed in the Samuel Oschin Telescope at Palomar.

ZTF, which is funded by the National Science Foundation (NSF) and other collaborators, scans the entire northern sky every three nights in search of supernovas, erupting stars, and other objects that otherwise change or move in the sky. As part of a NASA-funded program, ZTF team members search for near-Earth asteroids. When these space rocks speed across the sky, they leave streaks in the ZTF images. Each night, machine-learning programs automatically sort through about 100,000 images in search of these streaks, and then narrow down the best asteroid candidates to be followed up by humans. This results in about 1,000 images that team members and students sort through by eye every day.

"A lot of the streaks are satellites, but we can quickly go through the best images by eye to find the actual asteroids," says Bryce Bolin, postdoctoral scholar in astronomy at Caltech and a member of the ZTF team, who regularly hunts for asteroids. "This latest find really demonstrates that ZTF can be used to locate objects very close to Earth that are on potentially impacting trajectories."

After the ZTF team reported their finding to the International Astronomical Union Minor Planet Center, several telescopes followed up to learn more about the asteroid's size and orbit.

Caltech's ZTF is funded by the NSF and an international collaboration of partners. Additional support comes from the Heising-Simons Foundation and from Caltech. ZTF data are processed and archived by IPAC. NASA supports ZTF's search for near-Earth objects through the Near-Earth Object Observations program.