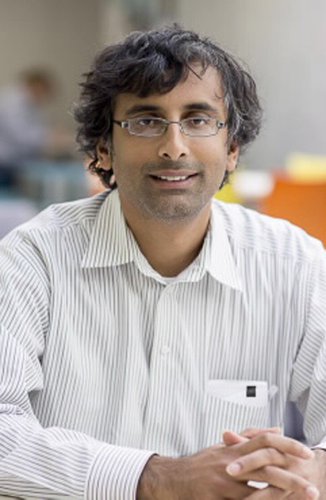 "Microlocal Analysis on Representations, and Applications To Number Theory"

I will talk about joint work, in progress, with Paul Nelson, where we study microlocal analysis on representations of a Lie group. I will describe an interesting algebraic phenomenon which seems to play an important role in applications theory: roughly, irreducible representations retain a form of irreducibility after microlocalizing. Our main motivation is a problem in analytic number theory (bounding L-functions) which I'll also discuss. No background in microlocal analysis (and very little representation theory) will be assumed.

Akshay Venkatesh, now at Stanford University, began undergraduate studies at UWA at the age of 14 where he was awarded first-class honours in pure mathematics. Professor Venkatesh received his PhD from Princeton University in his 21st year and is currently Professor of Mathematics at Stanford University. His research is in pure mathematics, specifically in number theory and related areas. In 2008, he won the SASTRA Ramanujan Prize which is awarded for outstanding contributions to areas of mathematics influenced by the genius Srinivasa Ramanujan (1887-1920).

The Leonidas Alaoglu Memorial Lecture was established by friends and family of the late Leonidas Alaoglu in recognition of his great talents, distinguished contributions to mathematics, and long freindship with Caltech. The Institute is privileged to honor his memory with a lecture each year by an outstanding mathematician.