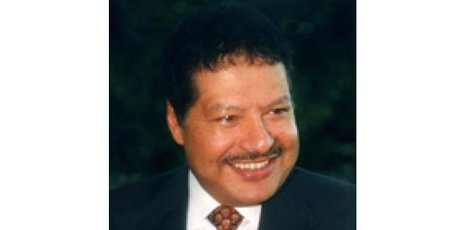 On March 29, the world's largest scientific society will bestow its highest honor on Ahmed H. Zewail, Caltech's Linus Pauling Professor of Chemistry and professor of physics.

At its 241st National Meeting and Exposition in Anaheim, California, the American Chemical Society (ACS) will present the 2011 Priestley Medal to Zewail. The ACS, whose membership numbers over 163,000, annually awards the Priestley Medal "for distinguished services to chemistry," as stated on the back of the gold medallion. According to ACS guidelines, no individual may be so honored more than once.

Zewail is being recognized for his pioneering work in femtochemistry, the visual study of chemical processes occurring on a scale of millionths of billionths of a second. In that period of time, light travels only about the diameter of a large virus (300 nanometers), a distance shorter even than one wavelength of visible light.

Femtochemistry uses extremely brief flashes of laser light to illuminate molecules in motion, exposing individual images that are then stitched together in chronological order. The resulting high-resolution, slow-motion electron microscopy "movie" provides a way for scientists to view chemical processes over time, and at an unprecedented resolution.

Zewail, winner of the 1999 Nobel Prize in Chemistry, has dubbed the new science "four-dimensional (4D) electron microscopy," because it encompasses not only the standard three spatial dimensions but also the dimension of time. Applications of the technology include improved understanding of the dynamics of chemical processes, visualization of the makeup of new materials, and insights into the function of cells and other biological structures.

The Priestley Medal commemorates the life of British scientist Joseph Priestley, who discovered oxygen in 1774 and spent the last 10 years of his life in the United States. Previous recipients include legendary Caltech chemistry professors Linus Pauling (1984), John D. Roberts (1987), and Harry B. Gray (1991).