The C.S. Shastry Prize in Physics

The Division of Physics, Mathematics and Astronomy is pleased to announce the C.S. Shastry Prize in Physics, made possible by a Caltech graduate alumnus who has generously created and endowed the prize in honor of his mentor and physics teacher, Prof. C.S. Shastry.

The prize will be awarded each year to a sophomore Physics major (the annual 'C.S. Shastry Scholar') upon completion of Ph. 11, the research course sequence in Physics. The student will be nominated by a faculty member based on criteria valued by Prof. Shastry: passion for the subject, curiosity about nature, and demonstrated ability. The award will provide funds for the C.S. Shastry scholar to conduct research in Physics during the sophomore summer, under the mentoring of a Caltech faculty member. 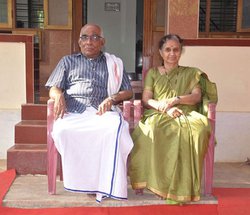 Prof. and Mrs. Shastry in front of their recently built home in Punacha village, Karnataka, India. In 2016, Prof. Shastry published his memoirs, “Memories of Childhood in a Bygone Age”, in Kannada. The book describes his growing up in a large ancestral 19th century farmhouse at this site, in a traditional ‘joint family’ of eight siblings and their families, with over forty members in the household. This is a way of life that has vanished in modern India. As an undergraduate in India, the alumnus was passionate about studying Physics, but societal circumstances resulted in him enrolling in a professional program that he greatly disliked, yearning to somehow pursue Physics. He was fortunate to meet Prof. C.S. Shastry, a physicist, who took him under his wing (as he did innumerable students) and mentored him over two summers, often dipping into his personal finances to do so. Prof. and Mrs. Shastry essentially treated him as extended family. The alumnus benefitted both in Physics and, more importantly, in life, from the close relationship fostered. The alumnus hopes that this prize can nurture similar experiences in formative years for future physicists.

Prof. Shastry's research career was primarily in nuclear physics. Several of his students have held academic positions, including at Indian Inst of Science, Notre Dame, Harvard, Inst for Advanced Study, Argonne National Labs, and U of South Carolina.